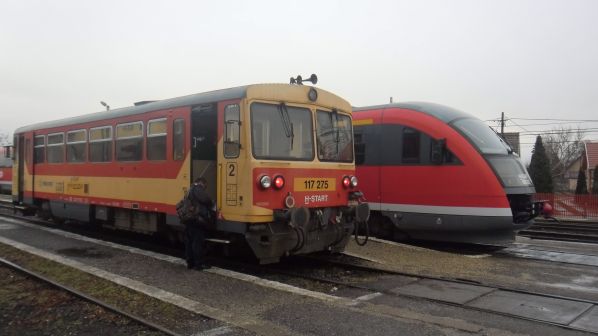 The route will be electrified under the plans, and speeds raised to between 80km/h and 120km/h, compared with a current limit of 40km/h on some sections. Stations will have improved accessibility and park and ride facilities, and the crossing with light rail Line 50 will be removed.

The upgrades will increase capacity to four trains an hour each way on the section closest to Budapest, and to one train every 30 minutes on the outer section, compared with the current hourly frequency.

The plans will increase speeds to between 80km/h and 100km/h. Sections between Budapest and Veresegyház will be doubled to increase capacity. Capacity will be increased on the Budapest Nyugati - Rákospalota - Újpest line with some track doubling. Stations will also be upgraded with improved accessibility, park and ride and bike and ride facilities, and two new stops will be built.

BFK will also begin planning to upgrade between Budapest Keleti, Hatvan and Újszász. This will include a third track between Budapest and Rákosliget, and upgrades to existing track. A new interchange with light rail Line 1 will be built, and Rákos station will be moved eastwards to interchange with light rail Line 3. Two other stops are planned. Trains will run every 15 minutes as far as Pécel and Gyömrő. A contract has already been awarded to build a third track between Budapest Keleti and Kőbánya-felső.

The plans are scheduled to be finalised by 2022, and planning will be financed by the European Union (EU).