THE Inter-American Development Bank has approved a $US 400m loan to support signalling and telecommunications upgrades and electrification of the 76km San Martin commuter railway in Buenos Aires, the only suburban line in the city not to be electrified. 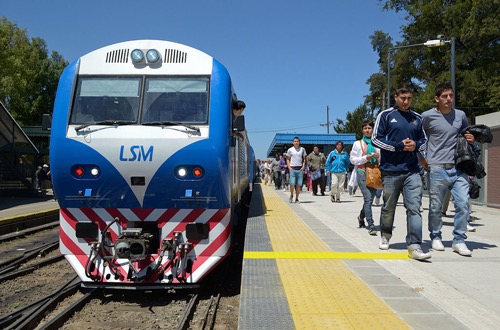 A CSR SDD7 locomotive which is in use on the San Martin line.
Photo Credit: Wikipedia Commons

The Argentinean government is providing $US 122m for the $US 522m project, which also includes construction of a new maintenance workshop and a station renovation project. The project is expected to reduce journey times on the line as well as significantly cut greenhouse gas emissions.

The 1676mm-gauge line, which operates from Retiro station in Buenos Aires and serves 22 stations terminating at Doctor Cabred in Lujan Partido, was used by 51 million passengers in 2016. The 25-year loan includes a 5.5-year grace period and a Libor-based interest rate.

Plans to electrify the line date back to 1907 but have suffered numerous false starts over the years. The government revisited the project in 2008, and while patronage on the line has improved significantly since 24 SDD7 diesel locomotives built by CSR and 160 new Chinese-built coaches were introduced in 2014, the government has continued to support electrification.

A feasibility study into the project by China Railway Construction Corporation was announced by the government in September 2015 at which point it said it would look to finance the project with the support of the Inter-American Development Bank.