CALTRAIN, which operates the San Francisco - San Jose commuter rail line in California, has awarded contracts to Stadler Rail for new trains and Balfour Beatty to electrify the 83.7km line. 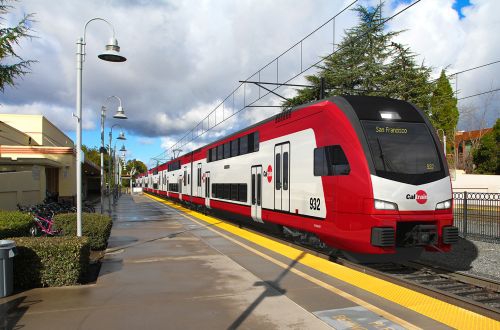 This is Stadler's first contract for Kiss double-deck trains in the United States.

Stadler’s $US 551m contract was signed in San Mateo by Caltrain’s CEO Mr Jim Hartnett, and Mr Peter Spuhler, owner and group CEO of Stadler. The contract covers the supply of 16 six-car Kiss double-deck EMUs with an option for another 96 cars worth an additional $US 385m. Each train will be 157.1m long and can be extended to seven or eight-car sets. The trains will have a maximum speed of 177km/h and bogies with built-in air-suspension to reduce vibrations and noise emissions.

The trains will be designed to meet the Federal Railroad Administration’s (FRA) alternative compliance requirements for mixed passenger and freight operation which require a high level of passive safety.

The first train will be handed over in August 2019 and will enter service in 2020 after acceptance and type testing trials.

Balfour Beatty’s $US 697m contract, which it says is the largest it has won in the United States, involves electrification of the line at 25kV ac, construction of two traction power substations, one switching substation and seven paralleling substations. Balfour Beatty will also replace signalling systems and earth existing facilities. Work will start in the autumn and is due to be completed in 2020.