Infrastructure issues and the Covid-19 pandemic cited as cause of the delays. 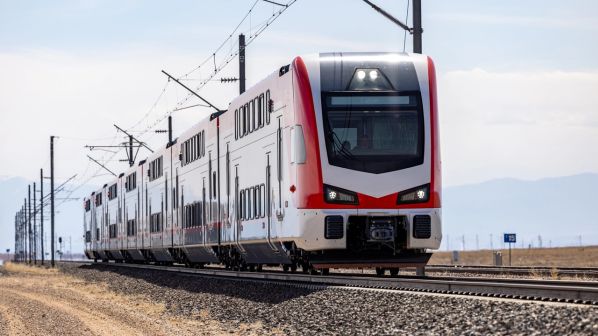 Testing of the first Stadler Kiss double-deck EMU is underway at TTC Pueblo.

CALTRAIN has confirmed that the launch of electrified services on its commuter rail network will be delayed by two years until late 2024.

The commuter railway cites complications in the installation of signalling systems, unforeseen conditions under Caltrain’s tracks, and the Covid-19 pandemic, which severely disrupted supply chains necessary to the project. The delay was announced at a Joint Powers Board (JPB) meeting on June 3, and is now being reviewed by the Federal Transit Administration (FTA), Caltrain says.

The project cost is also expected to increase by nearly 14% or $US 333m to $US 2.3bn, according to an estimate provided by an FTA draft Risk Refresh Report, based on the project’s progress so far and the design and construction work remaining, according to Caltrain.

FTA reported in December 2020 that the total project cost under the Full Funding Grant Agreement (FFGA) was $US 1.93bn with New Starts funding covering $US 647m of this cost.

“These delays are disappointing, because the electrification of Caltrain is desperately needed,” says Caltrain executive director, Ms Michelle Bouchard. “However, much has already been accomplished, and together with our contractors, funding partners and stakeholders, we will deliver the modern rail service that the Bay Area deserves.”

In addition, the first Kiss double-deck EMU from Stadler has been completed and is currently being tested at the Transportation Technology Center in Colorado. 70 car bodies have been shipped from Stadler’s plant in Switzerland, 55 of which are already in Stadler’s Salt Lake City plant for assembly with 15 in transit. However, Caltrain says the pandemic has slowed production, noting that it is now scheduled to receive the first EMU in February 2022. It anticipates accepting the 14th train in August 2023.

Of the $US 333m in additional costs, Caltrain says it has “identified a funding plan for the known and allocated costs of $US 161m. The remaining $US 172m is in unallocated costs that has been set aside as a reserve for unknown risks. The agency says it will be developing a funding plan over the coming months in coordination with the project funding partners.

“There is no question that the electrification of Caltrain is vital to the Bay Area,” says JPB chair, Mr Dev Davis. “It is the foundation of the expanded service that is necessary to shrink our carbon footprint, get cars off our highways and help people throughout the region get where they need to go conveniently and affordably.”