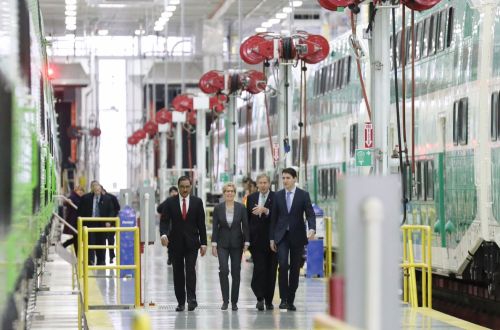 The funds are being provided through the New Building Canada Fund and the announcement was accompanied by news that more than 300 additional projects in Ontario have been approved under the Public Transit Infrastructure Fund.

The federal government says the investment is being provided as “the benefits of public transit...are well understood. So too is the cost of inaction.”

The RER project involves the introduction of 15-minute interval bi-directional services throughout the day on five of the seven Go Transit commuter rail corridors serving the Greater Toronto and Hamilton Area (GTHA), with 150km of new dedicated track, electrification, new trains, elimination of level crossings, and new and upgraded stations.

“Over the last few years the province has made significant progress towards modernising the entire GO network, allocating $C 13.5bn towards GO RER and another $C 7.8bn to upgrade and extend the GO network to include a regular service to Niagara and Bowmanville,” says the premier of Ontario Ms Kathleen Wynne. “At $C 21.3bn, the GO capital programme is the largest commuter rail programme in Canada. It is great that the federal government is now investing in this transformation.”

“More families are choosing to settle in communities like Etobicoke,” says Canada’s prime minister Mr Justin Trudeau. “These communities are growing at a rapid rate, and investment in public transit needs to keep pace. That is why we're investing in the GO rail network and over 300 additional projects in Ontario to reduce commute times, decrease air pollution, and improve the lives of millions of Ontarians.”

Along with the province of Ontario’s contribution to the GO RER, the federal government says this commitment will be the single largest transit project in which it has ever invested.

For more information on commuter rail projects around the world, subscribe to IRJ Pro.