THE Catalan autonomous government presented proposals on October 16 for a project to extend the Catalan Government Railways (FGC) Llobregat-Anoia metre-gauge suburban lines from its current Barcelona terminus at Plaça de Espanya beneath the city's central Eixample district to Gràcia. 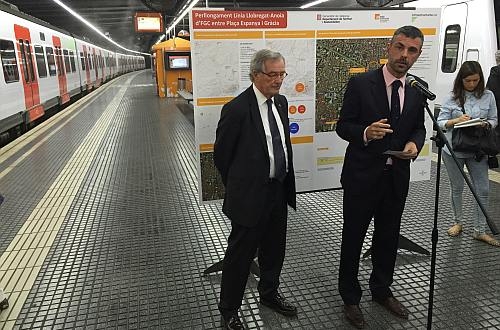 The 4.1km line would run in a twin-bore tunnel with intermediate stations at Hospital Clínic, an interchange with Line 5, and Francesc Macià, which is served by light rail lines T1, T2, and T3. The terminus at Gràcia will be an interchange between FGC's Llobregat-Anoia and the Barcelona-Vallés lines. According to a preliminary study, the total cost of the extension would be €321m, including the remodelling of Plaça de Espanya station.

The Llobregat-Anoia line is served by a mixture of metropolitan and suburban services which connect the current terminus in southeast Barcelona with the towns of Martorell, Manresa and Igualada.

With the extension of the line to Gràcia, many passengers travelling into the city would no longer need to change to metro lines 1 and 3. Indeed, the study suggests that the extension would boost ridership on the Llobregat-Anoia line from 23 million per year to around 37 million, an increase of around 60%.