THE cost of Auckland’s City Rail Link (CRL) has increased by more than $NZ 1bn ($US 673.9m) to $NZ 4.4bn following competitive pressures including an overcrowded construction market in New Zealand and Australia. 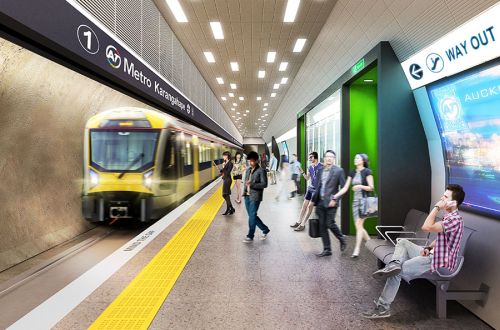 The C3 contract includes the construction of the twin-bore rail tunnels including two underground stations and rebuilding Mount Eden station.

The CRL will extend Auckland’s commuter rail network beyond the existing city centre terminal at Britomart, which will become a through station, to connect with the Western Line at Mount Eden which will be redeveloped. The underground link will be 3.4km long and up to 42m below the city centre streets.

CRLL chief executive, Dr Sean Sweeney, says progress on the project will continue while CRLL begins negotiations with the Link Alliance to deliver the $NZ 75m early works contract, including design, consents, permitting, utilities and mobilisation, over a three-month period.

“The project is already well underway at Lower Queen Street/Britomart, Albert Street and Mount Eden, and momentum will continue,” Sweeney says. “This keeps us on track to have this transformational project in place and delivering significant benefits for Aucklanders at the end of 2024.”

Sweeney says after a rigorous and comprehensive review of project costs, a revised cost envelope has been submitted to the project’s sponsors, the government and Auckland Council, for approval.

“The $NZ 1bn cost increase on the previous $NZ 3.4bn estimate made in 2014 reflects significant changes impacting the project in the past five years,” Sweeney says. “Eighteen months ago, the value of work in the infrastructure pipeline on both sides of the Tasman was $NZ 80bn; the value of that work is now estimated at $NZ 230bn.”

The updated costs have been submitted to the government and Auckland Council, who are funding the project on a 50:50 basis, with a decision expected in early May. Auckland mayor Mr Phil Goff has expressed support to cover the increase in funding required.

For detailed information on projects around the world, subscribe to IRJ Pro.