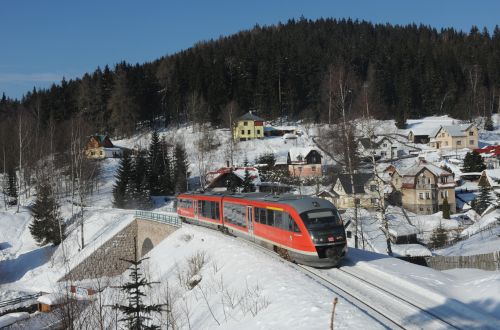 The contract will commence in December 2019 and lasts for 12 years. It includes the operation of around 3.4 million train-km per year, of which 1.1 million train-km is in Bavaria where the volume of operations will increase by about 10%.

DB Regio will use existing class 642 Desiro two-car DMUs to operate the services. The trains will be modernised and equipped with Wi-Fi, power sockets and offer improved amenities for passengers with reduced mobility. The trains will also have air conditioning and touch screen displays with passenger travel information.

Meanwhile, the public transport authority of the states of Thüringen and Saxony-Anhalt have awarded DB Regio a five-year contract to operate a new Regional Express service between Jena and Halle from December 2018.

Operation of the two-hourly RE 18 service will start in December 2018 using double-deck three-car trains, and will connect Jena Göschwitz and Halle Main station offering intermediate stops at Merseburg, Weissenfels and Naumburg (Saale). The annual volume of this contract is 160,000 train-km.

The new service is part of the Saxony-Anhalt diesel network, which Abellio secured the contract to operate from December 2018 in August 2016, and is also scheduled to expire in December 2023.