DB Regio has been selected by Oberelbe Transport Authority (VVO) for a 10-year concession to operate the VVO-diesel network in the Dresden area. 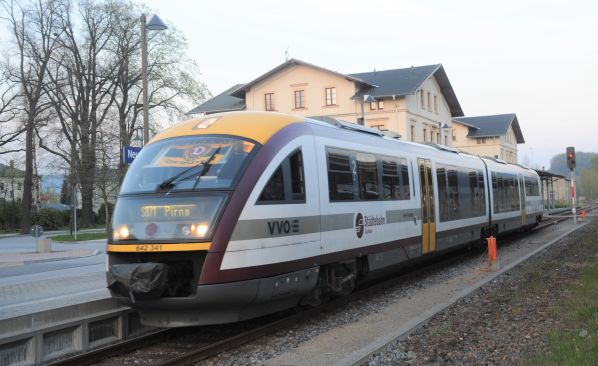 VVO diesel services are currently being operated by Transdev under a two-year contract until DB Regio takes over in December.
Photo Credit: Quintus Vosman

Operation will commence on December 11 2021 on the following lines:

Under the terms of the concession, DB Regio will increase the frequency of services to two trains per hour on weekdays from 04.30 to 08.30, and between 14.00 and 18.30. This will increase the annual train-km volume to 2.06 million from 1.8 million train-km previously. The ministry of transport of the German state of Saxony is providing additional financial support for the increase in frequency as a means of meeting environmental targets by encouraging modal shift to rail transport.

Appeals against VVO’s decision will be possible up to June 15.

DB Regio will replace Transdev, which VVO appointed under a short-term emergency contract to operate the concession from October 2019. Transdev replaced previous concessionaire, Städtebahn Sachsen, which filed for bankruptcy in July that year.

DB Regio will operate the services with Siemens-built Desiro two-car class 642 DMUs, which will be upgraded before the start of the contract. New onboard facilities will include air-conditioning, Wi-Fi, power sockets and a dynamic passenger information system. The trains also fulfill requirements for passengers with reduced mobility.

Bids for a tender to support VVO with the procurement of battery and fuel cell powered trains for operation on diesel lines around Dresden, including those for the concession awarded to DB Regio, closed on May 24.

VVO told IRJ that it expects to introduce the new trains in 2031 following the conclusion of the contract with DB Regio. The consultancy contract generated a lot of interest according to VVO and it is currently evaluating the offers. The chosen consultant will advise the authority on the preferred option to use battery or fuel-cell trains and the steps necessary to implement the required infrastructure.