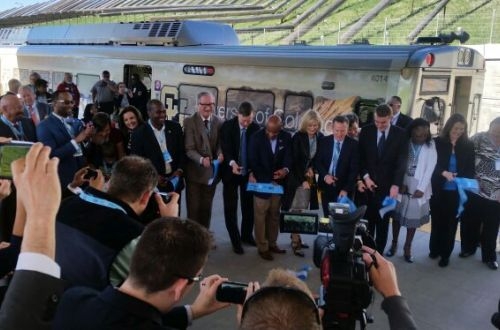 The double-track line which is electrified at 25kV 60Hz ac and includes seven new stations serving western districts of the city.

To celebrate the opening, Denver Regional Transportation District (RTD) will offer free travel on April 22 and 23 across its entire rail network.

The project is being implemented by PPP contractor Denver Transit Partners, a consortium of John Laing, Fluor, and Aberdeen Asset Management under a $US 2.2bn 34-year design-build-operate maintain concession awarded by RTD.

The project is being finaced with the aid of a $US 1.03bn Full Funding Grant Agreement from the Federal Transit Administration and $US 450m from the private sector.

Services are operated by 125km/h Silverliner V EMU cars supplied by Hyundai-Rotem. Each 26m-long car accommodates up to 232 passengers, 91 of them seated, with two wheelchair spaces. The 125km/h vehicles are being assembled at the Hyundai Rotem USA plant in Philadelphia, using bodyshells fabricated in Korea.