THE Argentine government has announced that it will not renew the contract held by operator Ferrovías for the 54km metre-gauge Belgrano North commuter line from Retiro Belgrano station to Villa Rosa despite Ferrovías’ application for a contract extension. 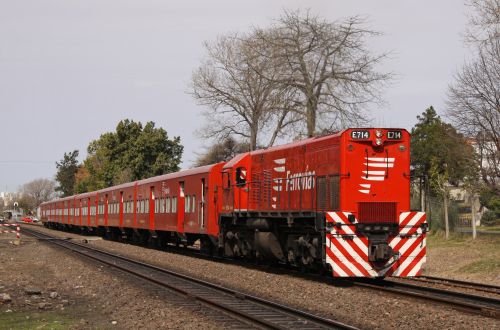 This decision means that all the private passenger concessions awarded in the mid-1990s for services from Buenos Aires have now been terminated, or will soon be. Since 2013 the Argentine government has taken over almost all the former commuter rail concessions serving the capital, in some cases dramatically improving services and investment.

The government announcement published in the country's official gazette confirms that Ferrovías will remain operator of the Belgrano North route until a new concession process is undertaken. In the event no new concessionaire is appointed, national operator Argentinean Trains (SOFSE) will take over operation. The announcement by the government states that Ferrovías, which does not set fares, currently receives subsidies covering 94% of operating expenses.

The Argentine government has previously suggested that it would invest Pesos 1.64bn ($US 83m) to improve the Belgrano North route over the next four years. Longer term the route forms part of the planned Buenos Aires RER project with a north-south metre-gauge tunnel planned between Retiro and Plaza Constitución stations, which will parallel a new 1676mm-gauge tunnel that will connect the Mitre/San Martin and Roca networks and will be built first.

Ferrovías is owned by Buenos Aires-based Grupo Emepa whose activities include train manufacturing and repair, and railway operation. Ferrovías has been operating the Belgrano North route since March 1994, and unlike many other commuter rail concessionaires in Argentina, invested in improving rolling stock and the locomotive fleet which primarily comprises 20 EMD G22CU diesel locomotives built in 1972-1980. Passenger numbers grew dramatically during the concession, from 14.8 million in 1994 to 45.7 million by 2007.

Elsewhere, the concession held by private operator Metrovias for the 26km electrified Urquiza Line expired on December 31 2017. The Argentine government rejected proposals from Metrovias for an extension and this line is also to be re-concessioned with Metrovias remaining as operator until July 2019.

In addition, in January the governor of the Province of Buenos Aires signed a decree to transfer provincial-owned rail operator, Ferrobaires, to the federal government with SOFSE set to take over its operations.

Ferrobaires was created as the trading name of provincial government-owned company UEPFP during the privatisation of former national operator Argentine Railways (FA) in 1992 and took over responsibility for 5500km of the network that had lost services since 1961, much of which remains out of service.

Ferrobaires operated services linking the capital and several important cities in the wider Buenos Aires province including the resort and port of Mar del Plata. Since June 2016, Ferrobaires services were suspended following an accident. Those which have restarted are operated by SOFSE under the Argentinean Trains brand.