THE Port Authority of New York and New Jersey (Path) has opened the first platform at the new World Trade Center (WTC) Path station, a major milestone in the development of the new $US 3.44bn WTC Transport Hub. 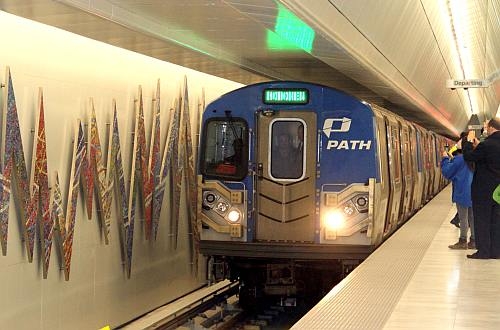 Platform A features new lighting, speakers, illuminated signs, escalators and lifts, and is serving trains travelling between WTC and Hoboken, New Jersey. The new station is designed to connect Path with the New York City Subway and MTA services at Fulton Street via a new underground passageway beneath Dey Street, and will eventually include two more passenger platforms for additional Path services to Newark, New Jersey and a service platform. The station site already offers connecting passageways to the World Financial Centre and Battery Park city ferry terminal.

Spanish architect Mr Santiago Calatrava has designed the new station which is located underneath the September 11 Memorial Plaza. According to Calatrava the structure of the new station building, known as the Oculus, will resemble a bird being released from a child's hand and is positioned at an angle so to maximise the effect of autumnal equinox rays.

Path hopes the new hub, which is expected to serve 250,000 passengers per day, will provide a Lower Manhattan rival to Penn Station and Grand Central Terminal. It expects to continue to open the new terminal in stages throughout 2015 up to its complete opening on December 17 2015.

Since the September 11 2001 terrorist attacks, Path services from Lower Manhattan to Hoboken and Newark have operated from a temporary station at WTC, which opened in November 2003 and has been altered as reconstruction work at the WTC site has progressed.