SWEDEN's minister for infrastructure Mrs Anna Johansson officially launched test operation along the full length of Stockholm's SKr 16.8bn ($US 1.96bn) City Line on January 14 when she made an inaugural journey through the 6km tunnel between Stockholm South and Tomteboda. 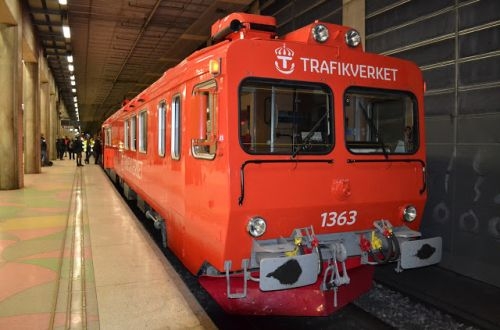 A Trafikverket Y1S diesel railcar is being used for the inital stages of testing as electrification work has not yet been completed. Trafikverket says it will complete fitting out of the tunnels by the middle of this year.

When it opens in July 2017, the City Line will double mainline rail capacity through the centre Stockholm, diverting suburban trains away from the congested double-track line between Stockholm South and Stockholm Central.

The project includes the construction of new underground platforms at Stockholm Central and a new station at Odenplan, which will replace the existing surface platforms at Karlberg. These will be the first mainline stations in Sweden to be equipped with platfrom screen doors.

A full description of the City Line can be viewed here.