NEW York’s Metropolitan Transportation Authority (MTA) and its Long Island Rail Road (LIRR) subsidiary announced that they have received four design proposals from qualified engineering firms for the modernisation of LIRR’s part of Penn Station as part of plans to transform Penn Station and the historic James A. Farley Post Office into a transport hub. 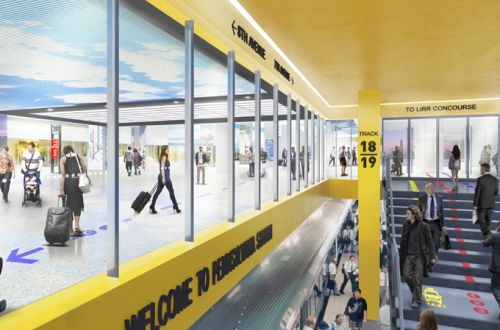 Working with LIRR, the winning firm will have six months to put the finishing touches on a design-build plan that will allow a general contractor to begin work in 2017.

MTA and LIRR will announce the winning design firm before the end of the year.

The redesign of the LIRR parts of Penn Station aims to improve passenger experience and circulation. The plan will include nearly tripling the width of the 33rd Street Corridor, which is among the busiest sections of Penn Station and stretches along the station’s lower level from Seventh to Eighth Avenue. Other improvements will include upgraded lighting and wayfinding, and digital information screens.

The majority of the corridor improvements will be completed simultaneously with the train hall’s opening, with other elements completed sooner. Construction of the new LIRR corridor will cost an estimated $US 170m. The redesign also includes upgrading Penn Station’s two metro stations. Many of these improvements to the stations on Seventh and Eighth Avenues are expected as early as 2018.

In September, governor Cuomo outlined his public-private partnership plan to turn Penn Station into a world-class transport hub, opening up the LIRR complex, and turning the Farley Building into a sun-drenched 237,000m² train hall which accommodates passenger facilities for LIRR and Amtrak. Under the plans, the Farley building will have a new transparent glass roof, but its classic Beaux-Arts exterior, very much reminiscent of the original Penn Station, would be retained. A balcony of retail stores is also an important element in the revitalised complex.

The governor also announced the selection of a developer-builder team made up of three companies - Related Companies, Vornado Realty LP, and Skanska AB - to redevelop the Farley Building. The entire project will be completed by December 2020.