GERMANY’s federal government is set to provide 60% of the funding required for a second east-west S-Bahn tunnel beneath Munich city centre under an agreement signed in the city on October 25 by federal transport minister Mr Alexander Dobrindt and minister president of the state of Bavaria Mr Horst Seehofer. 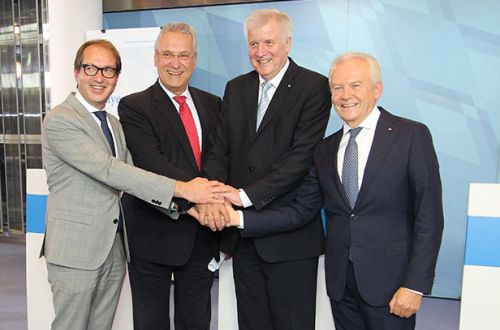 Following recent cost increases, the project now has an estimated pricetag of around €3.84bn, including a €640m contingency. The German federal government will contribute around €1.5bn to the project through the Municipal Transport Financing Act (GVFG), with €1.4bn coming from the state of Bavaria, €155m from the city of Munich, and €150m from DB. Any additional costs will be divided on a 60:40 basis between the federal and state governments.

The project involves constructing a 14km line from Laim in the west to Leuchtenbergring in the east running parallel with the existing line, which carries up to 60 trains an hour and has reached its capacity limit, with a 7km twin-bore tunnel between Donnersbergerbrücke and Munich East Station.
Three new underground stations are planned at Munich Main Station, Marienhof, and Munich East.

Groundbreaking is due to take place in April 2017 and the tunnel is expected to open in December 2026.