AUSTRIAN Federal Railways (ÖBB) signed an agreement with the City of Vienna and the Austrian Ministry of Transport on June 14 to invest €450m to improve and expand the Vienna S-Bahn network. 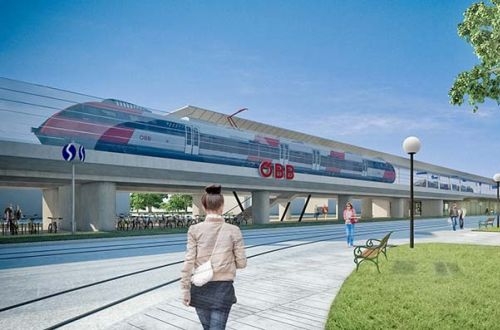 The federal government will provide €380m towards the enhancements, with the remaining €70m coming from the City of Vienna.

Two major projects are planned for the period up to 2025. The Hütteldorf - Meidling line will be upgraded at a cost of €265m to enable the operation of higher-frequency services on Line S80 with track-doubling on single-track sections and construction of three new stations. The project is due to be completed by 2025.

The second project involves extending Line S80 from its current northern terminus from Hirschstetten at present to Aspern North via an interchange with U-Bahn Line U2 at Hausfeldstrasse. The extension will provide an S-Bahn connection for a major urban regeneration project at Aspern.

The extension involves track-doubling on the section from Erzherzog-Karl-Straße to Aspern as part of a scheme to electrify the Stadlau – Marchegg line, which will also be at least partly doubled.

The project is due to be completed in 2023, providing a journey time of around 35 minutes between Aspern North and Hütteldorf.