Trials to begin on 17km section from Sahibababad to Duhai depot by the year-end. 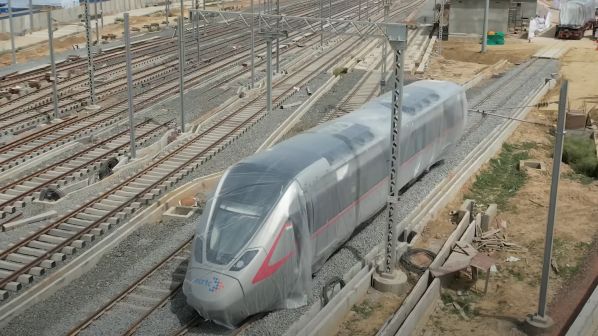 The first of the Alstom EMUs for the RRTS project after arrival at the Duhai depot.

WITH the expected arrival this month of a second EMU from the Alstom facility at Savli in Gujarat, the first line of India's ambitious Regional Rapid Transit System (RRTS) project is starting to take shape.

The RRTS network aims to connect Delhi with smaller cities of the National Capital Region through high-frequency trains designed to run at 180km/h and with an operational speed of 160km/h. Construction is underway on the first 82km line connecting Delhi with Ghaziabad and Meerut.

Trials are scheduled to begin on the 17km priority section connecting Sahibababad to Duhai depot by the end of the year and officials from the National Capital Region Transport Corporation (NCRTC) say that tracks have already been laid and masts and cantilevers erected for overhead electrication at Duhai depot. Commercial operation is expected to begin on the line from March 2023.

In May 2020, Alstom was awarded a €436m contract to design, build and deliver 40 EMUs, including 10 three-car sets for the Meerut Metro element of the project. Included in the package was rolling stock maintenance for 15 years. Manufacture of the trains began in July 2021 and the first train was delivered in May this year.

The RRTS promises to be a game changer for India's rail transport system and will use a hybrid Level 3 version of ECTS for what is claimed to be a world first. This will comprise a combination of standard ECTS using the latest Interlockings and automatic operation technology combined with LTE radio. Officials say this will allow a high train frequency and better throughput.

In another first for India, it is proposed that procurement of the Automatic Fare Collection (AFC) systems for RRTS will be done using the Hybrid Annuity Model, where the tasks undertaken by the system integrator and financial institution are separated. To help achieve the Indian government's goals of a National Common Mobility Card, NCRTC has joined forces with PayTM Payments Bank, which will work in coordination with Datamatics to install and maintain the AFC system for the Delhi – Meerut route. Mobile app, dynamic website and closed and open loop payment systems will be offered to passengers and NCRTC will also be using QR-code based ticketing to meet National Common Mobility Card standards.

With the Indian government keen to encourage a Public-Private Partnership model, the NCRTC recently awarded a 12-year operations and maintenance contract for the Delhi - Ghaziabad - Meerut corridor to German Rail (DB).

“With these two contracts in place and the first train already under testing and trial in our depot, we are working at war footing for commissioning of the 17km priority section so that it can be put to public service at the earliest opportunity,” NCRTC managing director Mr Vinay Kumar Singh told IRJ.