IRELAND's minister of transport, tourism and sport, Mr Paschal Donohoe, officially launched a €13.7m project on August 18 to upgrade a line in Dublin to create a new cross-city link for passenger trains. 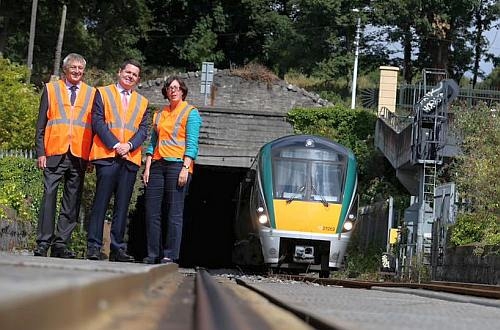 David Franks, Paschal Donohoe and Anne Graham at the launch in Dublin.

The launch was also attended by Ms Anne Graham, CEO of the National Transport Authority, which is channelling the funding from the government to Irish Rail (IE), whose CEO Mr David Franks was also present.

The works involve upgrading the 692m-long Phoenix Park tunnel and Drumcondra and Tara Street stations, track renewal, and resignalling, which is already underway, between Dublin Connolly and Grand Canal Dock.

When the work is completed in autumn 2016, commuter trains from Kildare, which currently terminate at Dublin Heuston on the western side of the city centre, will for the first time be able to run through to Connolly and Grand Canal Dock in the east.