Extension will serve development of 10,000 homes and is opening ahead of schedule. 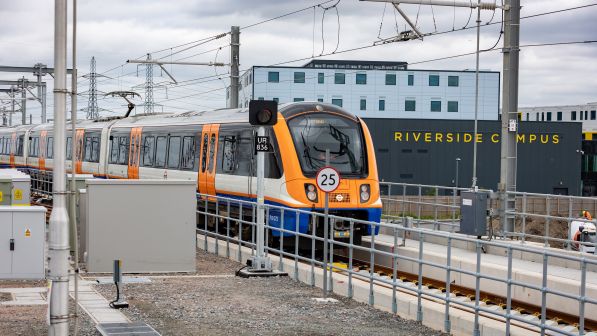 TRANSPORT for London (TfL) has announced that the 4.5km extension of the London Overground network from Barking to a new station at Barking Riverside will open on July 18.

TfL says that the Barking Riverside extension is opening ahead of the scheduled completion date this autumn, thanks to the good progress made with driver training and support from infrastructure manager Network Rail in completing final station fit-out work.

The Barking Riverside development will see 10,000 new homes built along a 2km stretch of the north bank of the River Thames, as well as new schools, community facilities, and commercial and retail premises.

TfL says that the London Overground extension “will vastly improve connectivity to one of London's fastest-growing areas, helping residents and visitors travel to and from the neighbourhood using active and public transport more quickly and more easily.”

Barking Riverside station has extensive cycle parking facilities, helping to promote greener and more sustainable journeys by making it easier for people to start or end their journeys by cycle, says TfL.

Major construction work on the extension began in February 2019, undertaken by a joint venture of Morgan Sindall Infrastructure and VolkerFitzpatrick under a contract awarded by TfL in December 2018.

The new viaduct to Barking Riverside and its track slab was completed in October 2021. Final commission of the signalling system was completed in March this year, enabling route testing and driver training to start in May.

“Residents will be able to benefit from a modern and spacious new station, which will be well connected with other local transport links including local buses and river bus services."

For detailed information on infrastructure projects from around the world, subscribe to IRJ Pro.