A groundbreaking ceremony was held in the Philippines capital Manila on February 15 to mark the start of construction on phase one of the North-South Commuter Railway project. 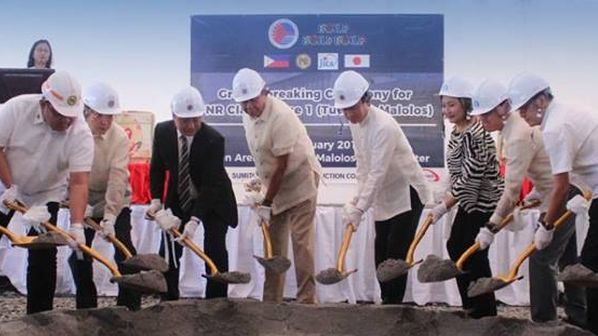 This follows the signing of a loan agreement in January between the Philippines Department of Finance (DOF) and the Japan International Cooperation Agency (Jica).

Sumitomo-Mitsui Construction will implement PNR Clark Phase 1. This comprises a 37.6km elevated electrified line with 10 stations running from the existing Philippines National Railway (PNR) station at Tutuban in northern Manila north to Malolos. The line will be operated by a fleet of 13 eight-car EMUs with a maximum speed of 120km/h.

When the line opens in the last quarter of 2021 it will cut the travel time between Manila and Malolos from around 1h 45min to 35 minutes. The line is expected to carry more than 300,000 passengers per day.

Around 91% of the alignment for phase one has already been cleared under advance works.

“This is testament to the effectiveness of the strategy that secretary [Mr Arthur] Tugade launched on January 5 2018, which is to pursue as much advance works as we can, as early as we can, so that by the time that contracts are signed with our contractors, construction works can immediately begin,” says the Department of Transportation's under-secretary for railways, Mr Timothy John Batan.

PNR Clark Phase 2 will extend the line by 53km from Malolos to Clark, Pampanga. The third phase, PNR Calamba, will involve building a 56km line from Manila to Calamba, Laguna. When completed, the full network will be 146.6km long with 37 stations and a fleet of 58 EMUs.

A groundbreaking ceremony is planned on February 26 to launch construction of the first phase of the Metro Manila Subway project, the city’s first metro, which is also being funded through a Jica loan. The 30km line will have 14 stations and will run from Mindanao Avenue in Quezon City to Ninoy Aquino International Airport.