PUGLIA regional operator Ferrotramviaria marked the completion of another phase in the modernisation of its train fleet on February 11, when three new four-car ETR 452 EMUs were formally presented to regional councillor Mr Giovanni Giannini by the railway's president Mrs Gloria Pasquini and by the company's general director Mr Massimo Nitti in Bari. 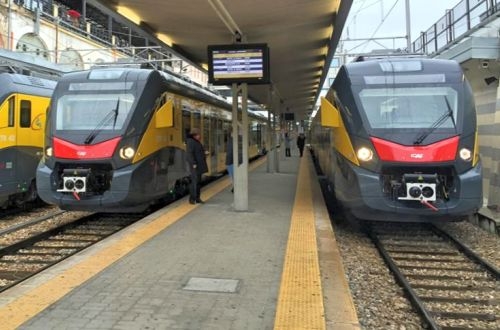 The delivery of the three trains takes Ferrotramviaria's Civity fleet to five units. The first two trains were introduced on services from Bari to Barletta and the Karol Wojtyla airport rail link at the end of 2014.

Each train accommodates up to 448 passengers, 243 of them seated, and the EMUs are fitted with SMCT signalling equipment, enabling operation on RFI's national network.

In addition to the ETR 452s, Ferrotramviaria has modernised its fleet in recent years with the acquisition of four Stadler Flirt EMUs and 10 Coradia trains from Alstom.

Ferrotramviaria operated a total of 1.95 million train-km last year, with most services operating under a contract from the Puglia regional government.

In addition to suburban and regional passenger services, the company also operates freight trains using two Bombardier class 483 Traxx electric locomotives. Two further units are due to be delivered by next year.