UP to three additional trains per hour will stop at Bromsgrove station in Worcestershire, Britain, from July 29 following the completion of electrification work on the line from Birmingham. 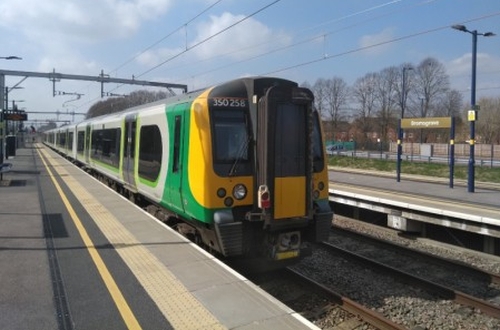 The number of West Midlands Railway trains serving Bromsgrove will increase from 45 to 132 on weekdays.

West Midlands Railway services on the Lichfield - Redditch Cross City line that currently start and terminate at Longbridge will operate to and from Bromsgrove, providing additional services at the station throughout the day and a fully electric service between Bromsgrove and Lichfield.

There will be up to five trains per hour to and from Birmingham New Street during the peak and between two and four trains per hour in the off-peak, an increase in the number of trains serving Bromsgrove from 45 to 132 on weekdays.

CrossCountry services will no longer call at Bromsgrove from July 30. Previously, two trains in each direction called at the station in both the morning and evening weekday peaks.

British infrastructure manager Network Rail (NR) has invested £100m in new track, new signalling and upgraded power to allow the new electric train service to run. The new overhead catenary between Barnt Green and Bromsgrove was energised in May 2018, when the first trains started test runs on the route. The electrification of the line is part of a £1bn investment in the region and follows the construction of the new Bromsgrove station, which opened in July 2016.

The extra trains to Bromsgrove will support a package of wider improvements to the Cross City line, including 100 new EMUs due to be delivered under the region’s new rail franchise which is managed by West Midlands Rail Executive - a consortium of local councils, in partnership with British government.