IRJ at Railtex 2017: Speaking at the Railtex exhibition in Birmingham, Britain, MTR's Mr Jeremy Long revealed that MTR, the Crossrail operator, is talking to Transport for London (TfL) about operating a more intensive service than originally planned when Crossrail is fully operational as the Elizabeth Line in December 2019. 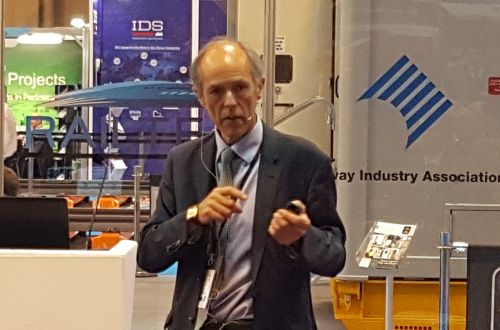 The peak-hour service on the core section is fixed at 24 trains per hour per direction, however MTR would would like to operate more trains than envisaged during the off-peak. Long told IRJ that MTR is also looking at the number of trains that would operate from Shenfield and Abbey Wood in the east to Heathrow Airport and Reading in the west.

Long says the first of Bombardier's fleet of 66 Aventra EMUs being supplied for Crossrail will enter service asseven-car sets during the off-peak between London Liverpool Street and Shenfield in two weeks time, and the new trains will gradually replace the existing fleet operating on this line. MTR will then take over the operation of the London Paddington - Heathrow Connect and some local services in May 2018 operating as nine-car units.

The core section of Crossrail from Abbey Wood to Paddington will open in December 2018. "This will be the most difficult period as we will be operating three separate sections of Crossrail," Long says.

Through services will be introduced between Paddington and Shenfield in May 2019 followed by through operation to Heathrow and Reading in December 2019.