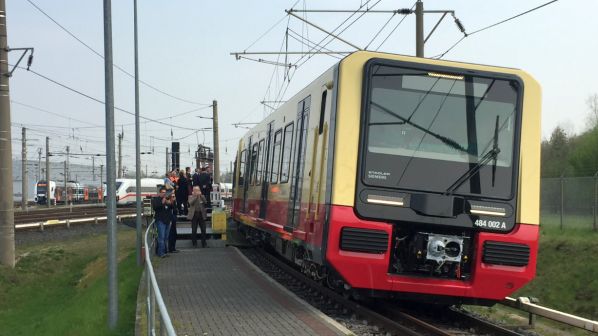 In December 2015 DB Regio subsidiary S-Bahn Berlin awarded a consortium of Stadler Pankow and Siemens a contract to supply 106 trains comprising 85 four-car class 484 and 21 two-car class 483 sets, which will enter service between 2021 and 2023.

Bodyshells are being fabricated at Stadler’s plant in Szolnok, Hungary, and moved by road for final assembly at Stadler’s factories in Berlin.

Detailed engineering design work was undertaken by a joint Stadler Pankow/Siemens team. Siemens is supplying traction equipment and bogies, which are derived from a design used for recent Oslo Metro’s MX3000 trains.

The testing programme at Wildenrath will involve five pre-series trains, the first of which arrived on site in late 2018. In total 160,000km of proving runs will be required before authorisation for commercial operation can be granted. So far 2000km has been run.

In addition to mileage accumulation and testing of individual systems and components at Wildenrath, some of the pre-series trains will undergo testing on the Berlin S-Bahn network later this year. In particular, this will enable testing of the older tripcock-based signalling system still in use on some parts of the network.

Grunau depot in eastern Berlin is being upgraded to maintain the new fleet. The new trains are fitted with an energy-efficient HVAC system, which is positioned to enable maintenance from inside the vehicle, avoiding the need for roof access or roof-mounted equipment. Traction and other equipment is installed under the floor of the vehicles.

Initial deliveries will enable the withdrawal of class 480 and 485 EMUs dating from the late 1980s. Later deliveries will replace class 481/482 trains built in the 1990s.

The first 10 trains will enter service on Line S47 from Spindlersfeld to Berlin Südkreuz as six-car sets formed of one class 483 and one class 484 from January 2021. Later deliveries will be used as eight-car trains on the S41/42 Ring Line as well as Line S46. Six-car trains will also be introduced on Line S8 by 2023.

The new trains are the first on the Berlin S-Bahn to feature through gangways although these are only within the two- or four-car set.

DB says the new trains feature increased seat pitch and more standing space around the passenger doors. The trains also have a multi-purpose area without fixed seats for wheelchair users or passengers with bicycles or pushchairs.