GERMAN Rail (DB) subsidiary S-Bahn Hamburg marked a milestone in the modernisation of its rolling stock fleet on October 10, when the first Bombardier class 490 EMU arrived at Ohlsdorf depot in readiness for the start of testing on the Hamburg S-Bahn network. 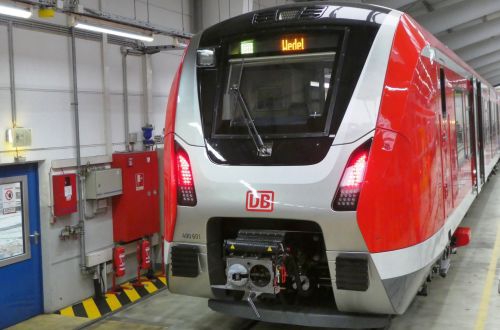 S-Bahn Hamburg ordered 60 of the three-car trains from Bombardier in June 2013 in a €327m deal which includes four dual-voltage sets capable of operating on both the 1.2kV dc third rail S-Bahn network and the standard German 15kV 16.7Hz ac overhead system.

The trains are being assembled at Bombardier’s Henningsdorf plant using bodyshells fabricated at the company’s facility in Wroclaw, Poland.

The first trial runs with passengers will take place in autumn 2017 and the entire fleet is due to enter service by the end of 2018, enabling the withdrawal of the fleet of class 472 trains, which date from the early 1980s.