SIEMENS and Stadler provided the first glimpse of the next generation of rolling stock for the Berlin S-Bahn network on June 27 with the rollout of the first completed class 484 half-set Stadler’s Pankow plant. 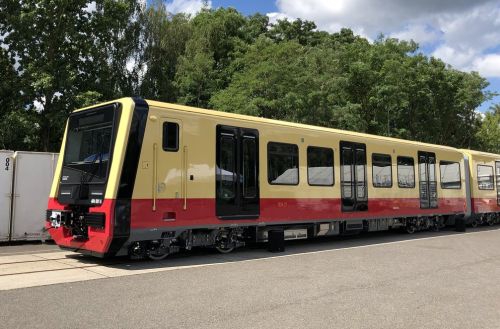 In December 2015 DB Regio subsidiary S-Bahn Berlin awarded a consortium of Stadler Pankow and Siemens a framework contract to supply up to 1380 vehicles, with the initial order for 106 trains comprising 85 four-car class 484 and 21 two-car class 483 sets.

Aluminium bodyshells are being fabricated and painted at Stadler’s plant in Szolnok, Hungary, with final assembly taking place at Pankow. The first train will be transferred from Pankow to Stadler’s test track at Velten in Berlin in the next few days for the start of dynamic testing. This phase will include the installation of software and testing of all electrical and mechanical equipment.

The train will then be transferred to Siemens’ testing and validation centre at Wildenrath. “Here we will thoroughly check the train under real operating conditions and simulate extreme situations with static or dynamic tests as part of the certification process,” says head of Siemens’ S-Bahn and regional trains unit, Mr Müslüm Yakisan.

S-Bahn Berlin is investing around €900m in the new fleet and associated modifications to its depot at Grünau.

The first class 484 is due to go on display at the InnoTrans exhibition in Berlin in September.