TRANSDEV subsidiary North West Rail (NWB) has been awarded a contract to operate S-Bahn services in and around Hannover from December 2021, following an unsuccessful appeal. The €1.5bn, 12.5-year contract has an annual average of 9.6 million train-km on the 385km regional network. 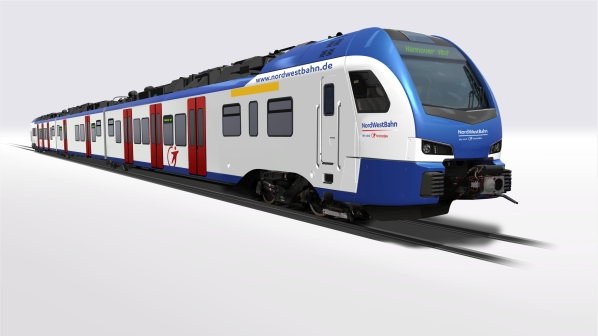 Stadler will supply 64 new Flirt 160 EMUs to operate on the network.

The contract is the outcome of a joint tender led by the Hannover regional government, together with Lower Saxony Transport Authority (LNVG) and Westphalia-Lippe Local Transport (NWL), located in the neighbouring state of North Rhine Westphalia. NWB, incumbent operator DB Regio, Keolis and Abellio submitted bids in mid-2016 and the contract was awarded to NWB in May, but put on hold while an appeal was heard.

The tender focuses on security and comfort, and called for a guard on each train. Capacity will be boosted on lines S1, S2 and S5, which carry the most traffic. Accessibility will also be improved, with open gangways and even floors throughout the train except for stairs near the cab. The trains will also be equipped with a toilet and Wi-Fi.

NWB is obliged to use 13 former DB Regio class 425 four-car EMUs that were directly funded by the contracting authorities, but will also order 64 new Stadler Flirt 160 EMUs at a cost of around €320m, including €5m for spare parts, which have capacity of 397 passengers, including 180 seated, and will have a maximum speed of 160km/h.

The 68m three-part trains have eight doors on each side, as well as a toilet equipped for the passengers with reduced mobility. The multi-purpose areas offer space for up to 12 bicycles, bulky luggage, pushchairs and wheelchairs, and are equipped with sockets for charging e-bikes and spaces for wheelchairs.

The contract also stipulates that trains must run exclusively on sustainably produced electricity.