FRENCH infrastructure manager SNCF Network has awarded a consortium of Vinci Construction and Spie a €496m contract to construct a new underground station in the business district of La Défense as part of the €3.7bn western extension of Paris RER Line E. 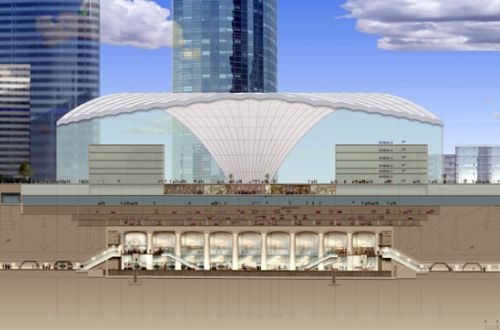 The extension involves constructing an 8km tunnel from Hausmann St Lazare to La Défense and Nanterre-la-Folie and upgrading the existing 47km line to Poissy and Mantes-la-Jolie. The extension will cut journey times between western suburbs and La Défense by up to 17 minutes.

The underground section from Hausmann St Lazare to Porte Maillot and Nanterre is due to open in 2020, with the remainder of the line to Mantes-la-Jolie scheduled for commissioning in 2022.

The station at La Défense will be located directly beneath the Centre of New Industries and Technologies (CNIT) with pedestrian corridors linking the RER Line E platforms to RER Line A, Transilien lines L and U, and light rail Line T2.

Vinci and Spie will begin initial construction works on CNIT-La Défense station this summer and the project will take five years to complete. The project includes the construction of an access shaft 40m deep and 15m in diameter as well as the station box and 1km of tunnel. A total of 350,000m3 of material will be excavated from the station site during construction.