PASSENGER services returned to the short 3km Tornesch - Uetersen line north of Hamburg for the first time in more than 50 years on February 20. 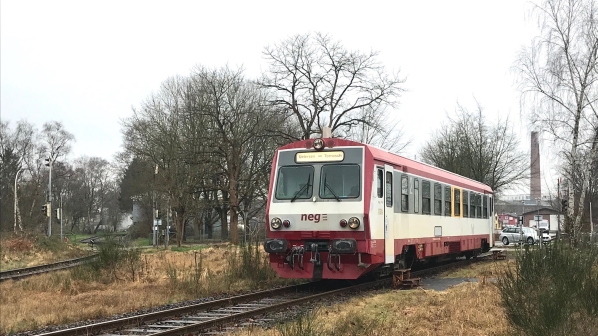 The experimental service stops at the site of the proposed Uetersen station on February 20.
Photo Credit: Keith Fender

Locals are being encouraged to use the experimental service, which will operate until February 25 to build the case for permanent reinstatement of the passenger service, reflecting substantial population growth in the area in the more than half a century since passenger services ended.

The service is being operated by Luxembourg Railways’ (CFL) German freight and regional passenger subsidiary NEG, which already operates freight services on the local-authority-owned line. The line, which opened in 1873, lost its passenger services in May 1965 but remained open for freight traffic to and from a paper mill in Uetersen.

Plans developed with local authorities for the reopening include three new stations along the line, which currently sits just outside Hamburg transport authority HVV’s area, although widening the area to include the reopened line has been discussed.

There is now a substantial list of potential line re-opening schemes across Germany as well as broad political support. However, capital funding for such projects remains limited among local and regional governments.