The new line between Manila and Calamba will enter service in 2028. 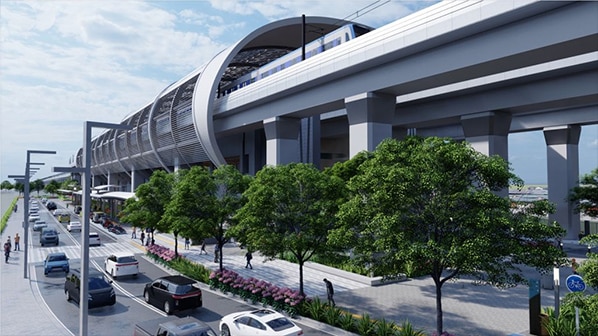 THE Philippines Department of Transportation has signed four civil works contracts worth a total of $US 1.87bn for construction of the significant portion of the South Commuter Project (SCRP), a new 55km railway that will connect Metro Manila with Calamba.

The contracts signed by secretary of transport, Mr Jaime Bautista, with the Korean joint venture of Hyundai Engineering & Construction and Dong-Ah Geological Engineering on October 6 cover construction of 31.5km of railway viaducts, nine elevated stations, and a railway depot for the Muntinlupa - Calamba section of the line. These deals were announced last month.

In addition, a joint venture of Korea’s Lotte Engineering & Construction, Gulermak Agir Sanayi Insaat ve Taahhut, Turkey, and the EEI the Philippines, will build the depot and a 500km connecting road.

Speaking at the signing ceremony, Mr Ferdinand Marcos Jr, president of the Philippines, said that the contract awards shows that the country is serious about pursuing big-ticket projects that are vital to sustaining economic progress and recovery.

SCRP is the southern section of the 147km North-South Commuter Railway network, which will run from Clark via Manila to Calamba, and is scheduled to open in 2028. The line will have 18 elevated and at-grade stations and is expected to be used by 600,000 passengers per day by 2040, cutting carbon dioxide emissions by 284,000 tonnes annually as commuters switch from road to rail.

“We welcome this development at a time when we are going - and we have used this phrase often - full speed ahead towards modernisation and our transport system and we are reclaiming our lives from the Covid-19 pandemic,” Marcos said. “This is what all of this truly means,”

The Asian Development Bank (ADB) approved a loan of up to $US 4.3bn to help finance the construction of the project in June while the Japan International Cooperation Agency (Jica) is financing railway systems and rolling stock.

“This project will open tremendous opportunities for economic integration across Metro Manila and neighboring provinces and create a significant positive impact on the local economy,” said ADB deputy director general for Southeast Asia, Mr Winfried Wicklein during the ceremony.

“It will strengthen the country’s economic recovery, create as many as 35,000 construction jobs and more than 3000 permanent jobs during the railway operation, and improve access for residents of Laguna province to employment in Metro Manila.”