BRITAIN’s National Audit Office says that the £7bn Thameslink project to upgrade routes through London has a realistic prospect of delivering value for money, but the Department for Transport (DfT) and Network Rail (NR) now face a challenge to introduce the new expanded services, as they failed to start preparation early enough. 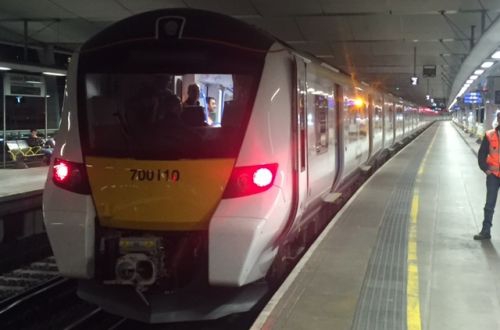 A Siemens Thameslink train at the rebuilt London Blackfriars station.

The Thameslink programme involves:
• two phases of infrastructure works carried out by NR at a total cost of £5.5bn: phase one covered the redevelopment of Blackfriars and Farringdon stations and was completed on time and budget in 2011 at a cost £2.4bn; phase two began in 2013 and included rebuilding London Bridge station, track remodelling, and resignalling with a budget of £3.1 billion.
• a £2bn fleet of 115 new trains supplied by Siemens and two new maintenance depots, and
• a combined Thameslink, Southern and Great Northern (TSGN) franchise awarded to Govia Thameslink in 2014 and running to 2021.

The NAO says the total cost of the infrastructure works has increased by 9.4% since 2012 to £5.5bn, while the cost for phase two jumped by 18% from £2.63bn to £3.1bn. This was because NR found the conditions at London Bridge station were not as expected, requiring changes to the design, additional work, and acceleration of other works to remain on schedule.

The NAO says NR has kept its infrastructure costs stable since the DfT agreed to increase the budget, and that NR has improved its financial control of the project.
However, the NAO says acceptance of the new trains is currently behind schedule, although efforts are being made to recover. Siemens had difficulties finalising the on-board software, which delayed acceptance of the first train. As a result, Govia Thameslink introduced the first train into service just over three months later than planned.

Further technical issues emerged when the trains entered into service. NAO says Siemens has addressed these issues, allowing Govia Thameslink to accelerate acceptance to make up for lost time. Siemens is expected to be back on the original acceptance schedule by December. Govia Thameslink is also carrying out testing to determine what infrastructure adjustments NR needs to make to deploy the trains.

However, the NAO says the wider rail network cannot yet reliably support the expansion of Thameslink services. Between July 2015 and March 2017, 13% of all Govia Thameslink cancellations and delays of more than 30 minutes were due to failure of track and other NR assets such as signalling. In 2016, NR estimated that up to £900m of additional work was needed, and it has prioritised a £300m programme on particularly vulnerable parts of the network.

The NAO says DfT and NR arrangements to manage the introduction of the new services were inadequate and there is limited time to complete planning. The auditor criticises the DfT and NR for not fully considering how to manage the transition to introduce the enhanced services. In late 2016, the DfT and NR established the Industry Readiness Board consisting of industry representatives to oversee service planning. As a result, the DfT has deferred the full introduction of the new services by up to a year, to improve its ability to manage the risks of each service change.

The DfT and Govia Thameslink had initially planned for a number of services from Sussex and Kent in the south to be connected through central London with services on the Midland Mainline, the East Coast Main Line and Great Northern line in the north in May 2018, with more services to be added from December 2018. To reduce the risk of disruption from introducing too much change simultaneously, the new services will be introduced more gradually, with the full timetable being implemented in December 2019.

“The Thameslink programme has a realistic prospect of delivering value for money, with significant benefits for passengers in terms of increased capacity, and more trains but a number of key risks and challenges still remain to be overcome,” says Sir Amyas Morse, head of the NAO. “The Department’s recent decision to introduce new services more gradually than originally planned means that passengers will get the full expected benefits one year later than planned, but it is a sensible step to protect value for money and passengers from further possible disruption due to large numbers of new services being launched at the same time.”