PLANS for privately-financed 400km commuter rail network centred on Ottawa and Gatineau took a step forward on July 1, when the Moose Consortium of eight local companies exchanged letters of intent with a consortium of LeMine Investment Group and Consortia N.A. (LeMine-Consortia N.A.) to assess the business and technical potential of the project. 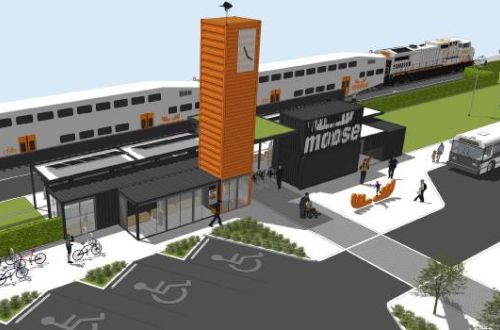 The Moose plan is based on what the project backers describe as a “property-powered rail open market development model,” which aims to optimise the return on property investment by providing passenger rail services on a commercial open-market basis to a limited number of so-called “linked localities.” This would be achieved without any government subsidy, public debt, or taxes.

Each station would be owned, developed and operated as an independent business in Moose’s linked localities consortium. To receive a train service, participating owners and investors in commercial and residential property would sign an agreement to split the increase in after-tax net income and realised asset value of real estate within an easy walk of each station.

Trains will serve each participating locality in exchange for a monthly fee based upon a simple formula that makes use of independent empirical data on the property market effects of access to the rail network.

“All the money's in the property,” explains Mr Joseph Potvin, director general of Moose. "Therefore, in essence, our model is all about real property value optimisation. And in this context, a safe, affordable and beautiful train service is just a method for generating that value."

"The property investors will naturally want to maximise their retained earnings, and they can do this by ensuring that every aspect of their value-boosting train service is excellent. They'll have profit-driven reasons to make sure the train is not underfunded.”

There will no set fares and the network will  operate on a pay-what-you-want basis, with fares revenues going back into improving the service because this will further fuel demand for property around stations.

The 50-station network, which will largely use existing infrastructure, comprises six lines linking Ottawa and Gatineau with Bristol, Arnprior, Smiths Falls, Montebello, La Peche and Alexandria. Moose forecasts the project will remove 25,000 vehicles per day from the streets of the Canadian capital and operating costs are forecast to be around $C 200m per year.

During the next three months LeMine-ConsortiaNA are taking initial steps in what could eventually be a $C 5m feasibility study.