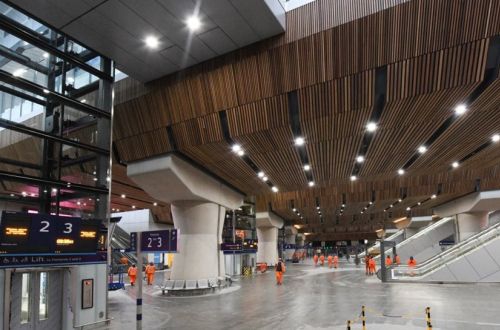 The work enabled the final five platforms and the station’s vast new concourse to serve passengers for the first time on January 2. Cannon Street trains have also resumed stopping at the station.

The new concourse unites each of the station’s 15 platforms for the first time while new entrances have been added at Tooley Street. The track southeast of the station has also been entirely remodelled to eliminate conflicting train movements and new signalling systems were successfully commissioned over the Christmas period.

Work is expected to continue on the station concourse until the spring, and new shops, cafes, and leisure facilities will open throughout 2018.

The work was carried out as part of the £7bn Thameslink Programme, which is upgrading the north-south route through London. New signalling system and double track to replace the previous single-track section between London Bridge and Blackfriars were successfully installed in November, with this section of track set to reopen in May.

“The work at London Bridge paves the way for the reintroduction of Thameslink services at the station and Govia Thameslink Railway’s (GTR) modernisation of its train services,” says Mr Charles Horton, chief executive officer of GTR. “In May we’ll be introducing an exciting, new, expanded Thameslink network connecting new communities north and south of the capital with quicker journeys across central London and additional capacity.”