ENVIRONMENTAL approval was granted in mid-May for a $US 1.56bn project to introduce a second commuter rail service in the Chilean capital running 25km from Santiago to Malloco on the line to Melipilla. 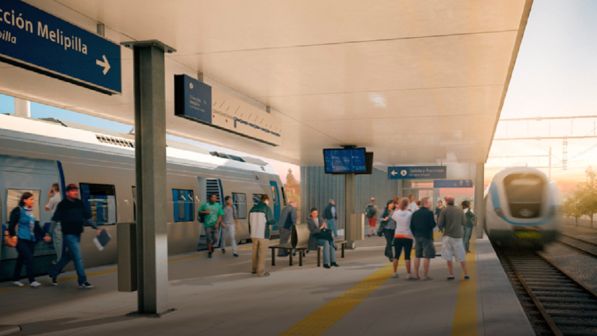 Artist's impression of a station on the new line from Santiago to Malloco.

Chilean State Railways (EFE) plans to start work next year and to open the line in 2025.

This was followed on May 17 by a surprise announcement by Chile’s president, Mr Sebastián Piñera, of plans for a third commuter rail line running north from Quilicura, on an extension of Santiago Metro Line 3, to Batuco and eventually Tiltil. The Ministry of Transport says that a basic engineering study was completed for the scheme in December 2017. The ministry says it will now respond in July to an environmental evaluation that commenced at the end of the 2017.

EFE has been planning a suburban service between Santiago and the dormitory town of Melipilla, 61km southwest of Santiago, since the mid-1990s. The project did get to the tendering stage, but there were no bidders due to an underestimated budget requirement and disagreements between EFE and Santiago Metro over the location of the city centre terminal.

However, EFE did not abandoned the project, and the first stage as far as Malloco formed part of the company’s 2014-16 development plan. Yet, works were not initiated, one problem being an inability to obtain environmental approval.

Within the urban area, as far as Ciudad Satelite, fares will be integrated within Santiago´s “¡bip!” public transport fares system, which also encompasses the city’s buses and metro. Melitren, as the project is known, will have interchanges with metro lines 1 and 6.

Since Santiago Metro plans to complete new lines 7, 8 and 9 as well as extensions to lines 2, 3 and 4 by 2026, it is implied that Santiago’s urban and suburban rail network will increase from 160km to 296km, within a space of seven years, excluding the line to Batuco.