A high-level meeting between Mr Andreas Meyer, CEO of Swiss Federal Railways (SBB), and Mr Guillaume Pepy, president of SNCF, on September 13 in Zürich has laid the basis for closer cooperation in ensuring the smooth launch of the cross-border Léman Express regional network in the Geneva area at the end of 2019. 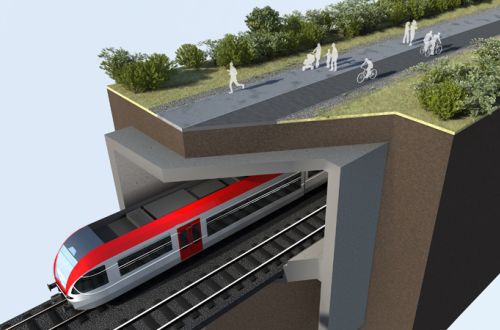 The 220km network will include 45 stations, connecting more than a million people in the Swiss cantons of Geneva and Vaud with the Auvergnes/Rhône-Alpes region of France. At the heart of the project is the newly built 16km Ceva line between Corravin, Eaux-Vives and Annemasse.

The two railway chiefs agreed to strengthen cross-border cooperation by merging the two teams responsible for the Léman Express service. The new organisation will start work in the first quarter of next year and will be disbanded when the network is operational. The team is being led on the SBB side by Mr Daniel Leuba, and Ms Armelle Laugier is his opposite number from SNCF.

Their main task is to ensure the new service starts on time, including the introduction of 23 Stadler Flirt France and 17 Alstom Régiolis Ceva dual-voltage EMUs. Personnel also have to be trained, including train drivers, who will continue to be schooled by the parent companies SBB and SNCF.

At the same time a joint subsidiary, Lémanis, will be founded at the end of this year with a view to starting work in 2017. The main task of this company is to launch commercial operations and coordinate the operation of the network. Owned 60% by SBB and 40% by SNCF, it will be based in Geneva, and replace the study and marketing company Transferis, set up in 2008 as the first milestone in the cooperation between SBB and SNCF.