FRENCH National Railways (SNCF) president Mr Guillaume Pepy and Swiss Federal Railways (SBB) CEO Mr Andreas Meyer signed a joint letter of intent in Paris on October 30 providing a basis for the operation of the cross-border France-Vaud-Geneva RER network, which is due to be launched in 2017. 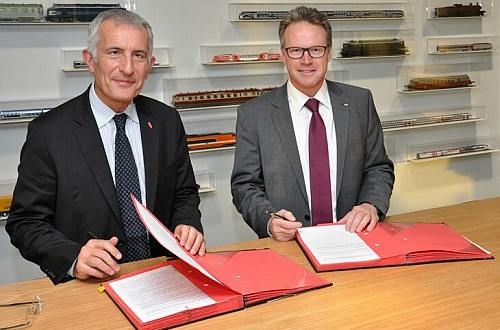 A joint company, majority-owned by SBB and based in Geneva, will be established at the end of next year, to operate the 230km 45-station network, which will encompass lines from Geneva to Annecy, Bellegarde, Evian-les-Bains, Coppet, and St Gervais. Daily ridership is expected to be around 50,000 passengers.

A core element of the network is the Cornavin-Eaux Vives-Annemasse (Ceva) project, which involves the construction of a new 16km link between Lancy-Pont Rouge and Eaux Vives to provide a new direct rail link between Geneva and Evian-les-Bains. The Geneva – Bellgarde line is also being upgraded with new catenary, a project which is due to be completed by next December.

Staff from SBB and SNCF will jointly develop plans for the operation of the network, including timetables and the fares structure as well as links to other transport modes and marketing. The joint company will also be responsible for specifying new rolling stock and managing the procurement process.

SNCF says the creation of the joint company has the backing of the French region of Rhône-Alpes and the Swiss cantons of Geneva and Vaud as well as the two countries' national governments.