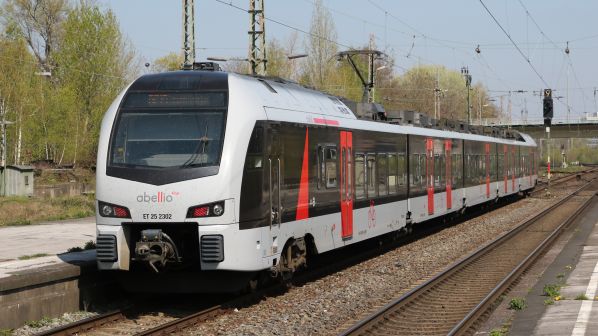 The winning bidder will take over a fleet of Stadler Flirt EMUs.
Photo Credit: Keith Fender

The contract will cover the operation of the RE 16 regional express service from Essen to Hagen and Iserlohn, as well as regional routes RB 46 (Bochum - Gelsenkirchen) and RB 91 (Hagen - Iserlohn/Siegen).

The deadline for submitting bids is October 5.

There will be contract options for increasing and decreasing the number of train services operated, and price will not be the sole criterion for selecting the preferred bidder, who will be required to take over staff from the current operator.

The preferred bidder will be expected to take over the current contract for leasing the Stadler Flirt EMUs that operate part of the Rhine-Sieg network. There will be requirement to purchase or otherwise obtain rolling stock to operate route RB 46.

The preferred bidder will be offered use of the existing workshop in Hagen to maintain the Rhine-Sieg fleet, with this work to be undertaken either by the operator itself or its rolling stock maintenance contractor.

The operator will be obliged to use the facilities at Siegen and Letmathe for emptying and cleaning train toilets.