Commercial services are due to begin in November. 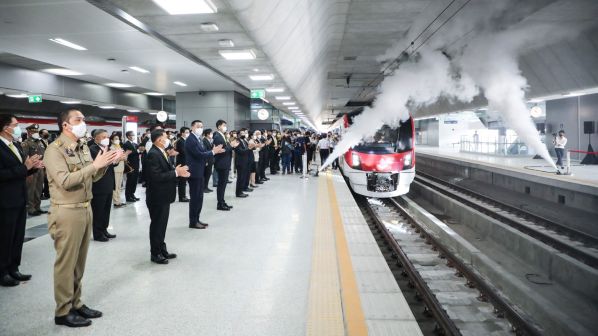 TRIAL operation has commenced on the Red Line commuter service in Bangkok, which connects with the newly-constructed Bang Sue central station that will become the country’s major rail hub following the completion of Thailand’s high-speed rail network.

Services will operate every 30 minutes between 06.00 and 20.00, increasing to every 15 minutes during peak periods for a total of 78 journeys each day with capacity for 1710 passengers on each train, although this will initially be capped at 50% due to the Covid-19 pandemic.

The first service was launched by prime minister, General Prayut Chan-o-cha, on August 2 at a ceremony attended by minister of transport, Mr Saksiam Chidchob, the governor of State Railway of Thailand (SRT), Mr Nirut Maneephan, the Japanese ambassador to Thailand, Mr Nashida Kazuya, and the chief representative of the Japan International Cooperation Agency (Jica) in Thailand, Mr Morita Takahiro.

SRT awarded a Baht 32.4bn four-year electrical and mechanical turnkey contract to a Japanese consortium of Mitsubishi Heavy Industries, Hitachi, and Sumitomo in April 2017. The contract included the design and installation of track, overhead electrification, signalling, and telecommunications on the elevated extensions as well as the supply of EMUs.

Nippon Signal was awarded a signalling contract by Mitsubishi Heavy Industries in January 2018 to install a computer-based interlocking, automatic train supervision system (ATS), automatic train protection (ATP) and a train detection system, including ETCS Level 1. Thales was sub-contracted by Nippon Signal to install the ETCS Level 1 on the rolling stock and the line.

Hitachi shipped the first of 25 EMUs for the project from its Kasado facility in Japan in September 2019.

A skywalk will be built to connect with the proposed Pink Line and Chulabhorn Hospital at Lak Si Station. Other forms of transport such as bus routes have been adjusted to better connect with the Red Line.

Bang Sue central station will replace Hua Lamphong station as the major hub for long-distance and regional services in Thailand. Construction of the new station began in 2013 and was completed earlier this year. The station, which is currently being used as a vaccination centre, is due to officially open with the start of commercial operation on the Red Line in November.

A 20,700m2 mezzanine floor will have shops and a control room. The 72,500m2 basement has 1700 parking spaces, including 19 spaces for people with limited mobility. The station also features an 18,630m2 royal monument, which includes a 14,000m2 pond as a tribute to the king. A 6m-wide clock built by Electric Time Company, United States, has been installed 21m above ground level at the front of the station.

For detailed data on commuter rail projects from around the world, subscribe to IRJ Pro.