Two-track commuter line partly in tunnel has been built with 16 stations alongside a double-track mainline. 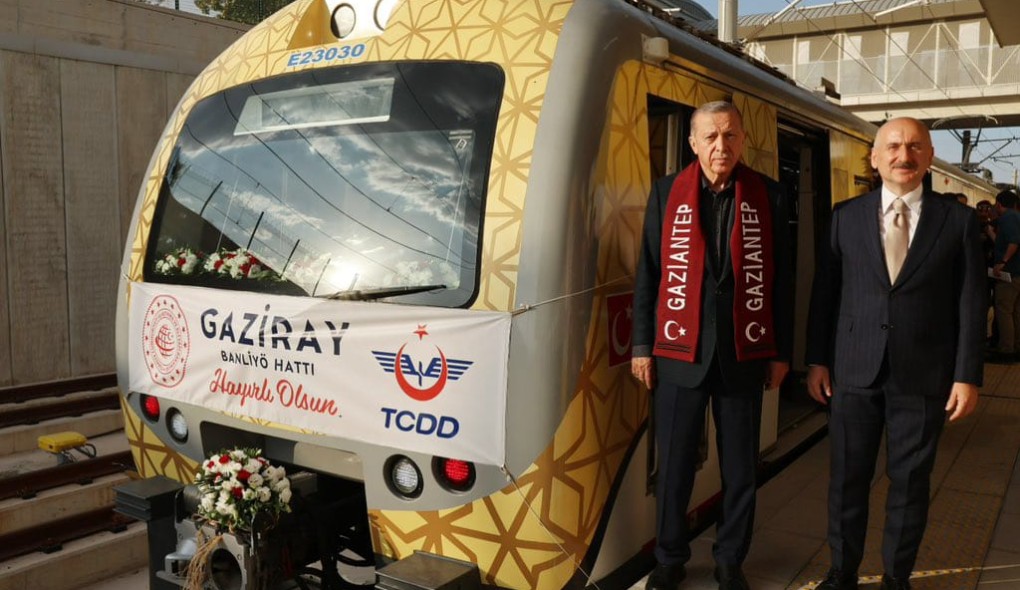 THE 25.5km Gaziray suburban commuter rail corridor in the southern Turkish city of Gaziantep opened to passengers on November 5 in the presence of the country’s president, Mr Recep Tayyip Erdoğan.

Also present was Turkey’s minister of transport and infrastructure, Mr Adil Karaismailğlu, who said Gaziray was “one of the most important projects in our ministry”, and it had been implemented with an investment of approximately Turkish lire 10bn ($US 539.6m) to make the railway line passing through the city suitable for both the urban commuter rail system and high-speed operation.

Developed as a joint venture by infrastructure manager Turkish State Railways (TCDD) and Gaziantep’s city council as part of a modernisation and electrification programme for the original single-track Mersin - Adana - Osmaniye - Gaziantep railway, the new commuter service runs on two tracks laid alongside a fast double-track mainline used by inter-city and long-distance trains. The new four-track section runs between Taşlıca in the southeast of the city and Başpınar in the north.

The line is part of the Gaziray project, for which construction work began in March 2016 and was undertaken in several packages by local contractors Kolin, Kalyon and BS Uluslararsi Mühendislik. The project involved rebuilding a 5.4km section of railway through the city centre on a new underground alignment using a cut-and-cover tunnel construction method. The project also involved construction of 16 new stations for the Gaziray commuter services, four of which are located underground.

The project also required drilled tunnel totalling 5km, and construction of eight bridges and 10 underpasses, design work for which was undertaken by Ankara-based Inpro Engineering Consultancy.

Early in 2021 Turkish state-owned manufacturer Türasaş won a €47m contract to supply the eight four-car aluminium bodied EMUs for the Gaziray commuter service. They can run at up to 120km/h and each have capacity for 1000 passengers.

The name Gaziray, originally applied to the city’s light rail lines but now transferred to the new commuter rail services, takes part of the name Gaziantep and marries it to the Turkish word “ray,” meaning rail. The line is the fourth commuter rail system in Turkey after Izmir’s Izban, Istanbul’s Marmaray, and the capital Ankara’s Başkentray.

Speaking at the Gaziray opening ceremony, Erdoğan hailed the new service as a “historical investment” and said it “was worth the troubles experienced in the process of bringing it” to the city. He also announced that the new service “which citizens have been waiting for with great longing” would be free of charge to travel on until the New Year.

For detailed data on suburban rail projects around the world, subscribe to IRJ Pro.