TURKISH Prime Minister Mr Recep Tayyip Erdogan formally launched test operation of the Marmaray link between the Asian and European sides of Istanbul on August 5, when he took the driver's seat for a historic first trip beneath the Bosphorus. 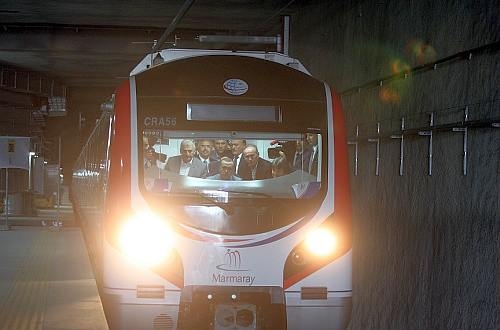 The journey through the 13.3km tunnel between Üsküdar on the Asian side and Sirkeci on the European side took just six minutes, and marks a milestone in the Lira 9.2bn ($US 4.8bn) project. The tunnel is world's deepest immersed tube tunnel, constructed at depths of up to 60m below sea level.

The line will be inaugurated on October 29, the 90th anniversary of the founding of the Turkish Republic, and shuttle services will initially operate between Kazilicesme and Üsküdar until the rest of the project is completed. The line will ultimately run for 76.3km from Halkali in the west to Gebze in the east, reducing the journey time from 1h 45min (by train and ferry) to 1h 4min.

The Marmaray line is expected to carry 1.5 million passengers per day by 2015.