HELSINKI Regional Transport Authority (HSL) confirmed on February 10 that it will negotiate a five-year transitional contract with Finnish national train operator VR Group for the operation of suburban services in the Helsinki area from April 2016. 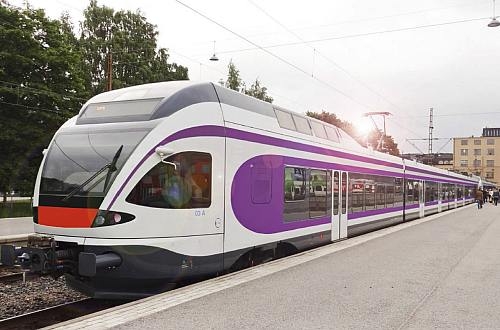 HSL unveiled a new livery for its suburban trains on February 5, which will be applied to the fleet of Sm5 Flirt EMUs.
Photo Credit: HSL

The proposals put forward to HSL by VR Group for 2016-2021 offer a saving of €30m compared with the current contract, and HSL says the price being offered is roughly the equivalent of what it would expect to achieve through a competitive tender. In VR Group's offer, the biggest savings would be achieved at the end of the contract period.

HSL argues that cutting the cost of the contract will reduce pressure to raise fares and would also allow the replacement of ageing Sm2 EMUs with new rolling stock by mid-2017, earlier than previously envisaged.

"The transitional agreement may provide passengers with the benefits of a competitive tender earlier than previously scheduled," says HSL CEO Mrs Suvi Rihtniemi. "Increasing the time to prepare for competitive tendering also minimises the risks and means the conditions for potential operators are more stable."