Final 16km from Beniel to Murcia opened on December 19. 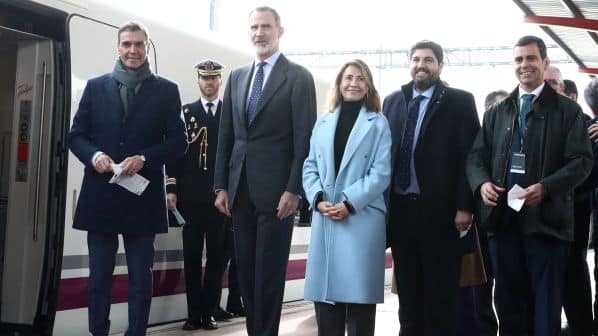 SPANISH infrastructure manager Adif AV has opened the final section of the high-speed line between Madrid and Murcia, southeast of the capital, running for 16km from Beniel to Murcia.

The Beniel - Murcia section has cost €410.8m to build and was officially opened on December 19 by King Felipe VI.

He was accompanied on the inaugural service by Ms Raquel Sánchez, minister for transport, mobility and the urban agenda, Adif AV president Ms María Luisa Domínguez, and president of Renfe, Mr Isaías Táboas.

Completion of the line to Murcia takes the Spanish high-speed network to over 4000km, the largest in Europe and second only to China in size. Adif AV says that four new lines with a total length of 287km were added to the Spanish network in 2022.

The Beniel - Murcia route is equipped with ERTMS Level 2, which according to Adif AV maintains Spain’s position as having ERTMS in service on the greatest length of routes.

The new line between Beniel and Murcia runs parallel to and shares the formation of the existing 1668mm-gauge route. There are sections of dual 1435mm and 1668mm-gauge at El Reguerón and on the approaches to Murcia.

At a cost of €3.3bn, a new line is being built from Murcia to Almería under the Mediterranean Corridor programme to provide a 1435mm-gauge route from the French border to Algeciras.

Construction has also involved placing the railway underground within the city of Murcia, where a new temporary station has been built alongside the existing facility.