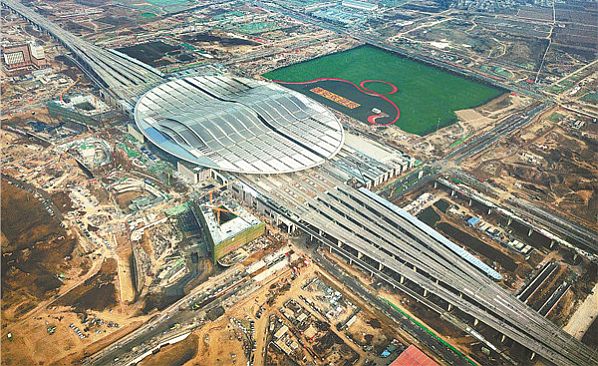 Xiong’an station has 13 platforms and 23 tracks and will become a high-speed rail hub.

The new line has four stations, a maximum speed of 350km/h and is an extension of the 250km/h line from Beijing West to Daxing Airport which opened on September 26 2019.

The fastest journey time between Beijing West and Xiong’an is 50 minutes, while the trip from Daxing Airport to Xiong’an takes 19 minutes.

Xiong’an station has 13 platforms and 23 tracks and covers an area of ​​475,200m2. The station has an oval roof and is 47.5m high with three floors above ground and two below. Passenger flows are separated so that people entering and exiting the station do not conflict.

The stations are also designed to be intelligent to achieve precise passenger positioning, route planning, and location search. The new line is equipped with an earthquake warning system and integrated video to improve high-speed rail disaster prevention.

China National Railway is initially running 16 round trips per day between Daxing Airport and Xiong’an at an initial maximum operating speed of 300km/h, but this will be stepped up to 17 trains per day when the new national timetable is introduced on January 20.