The breakthrough is the last section of the 4km tunnel. 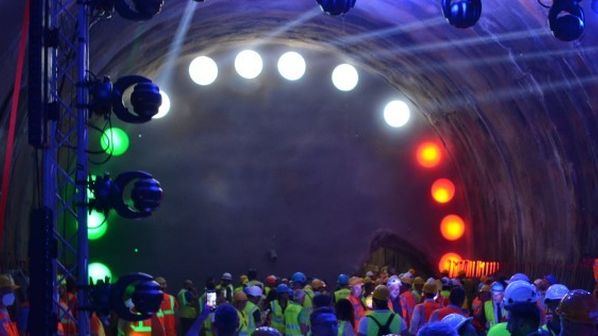 THE last diaphragm wall in the Monte Aglio Tunnel was demolished on June 22, marking a major breakthrough on the Naples - Bari high-speed/high-capacity line, the first section of which is due to open in 2024.

The 4km tunnel, which connects Maddaloni and Valle di Maddaloni, is part of the Cancello - Frasso Telesino section. Excavation began in June 2019, and was completed using conventional methods, with the use of monitoring systems enabling work to be carried out safely 24 hours a day.

The work already completed on the section, including the tunnel breakthrough, will allow the launch of a direct service between Naples and Bari by 2024 using the existing Rome - Naples line via Cassino.

The entire Naples - Bari line will cost €5.8bn, with the full project due to be completed in 2027. This will provide a Bari - Naples journey time of two hours, and a Bari - Rome journey time of three hours. The new line will form an integral part of the European Union’s TEN-T Scandinavia-Mediterranean Railway Corridor and is being financed through Italy’s National Recovery and Resilience Plan (PNRR).

The Naples/Afragola interchange and the Bovino - Cervaro section have already been completed, while work is underway on the Napoli - Cancello, Cancello - Frasso, Frasso - Telese, Telese - San Lorenzo, San Lorenzo - Vitulano and Apice - Hirpinia sections. Work is due to begin in July on the Hirpinia - Orsara and Orsara - Bovino sections.