BRITAIN’s Department for Transport (DfT) has deposited a hybrid Bill in Parliament seeking powers to build Phase 2a of HS2 from Lichfield to Crewe, which is expected to open 2027, and has confirmed the alignment for Phase 2b from Crewe to Manchester and from Birmingham to Leeds. 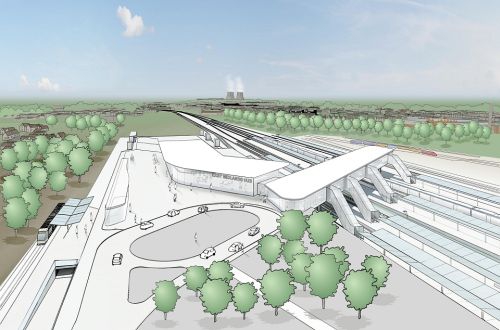 The government confirmed most of the Phase 2b alignment in November. However, consultation was launched on seven route refinements in which almost 7000 people took part. The main change is in the Sheffield area where plans for a new station at Meadowhall northeast of the city have been dropped in favour of a link from HS2 to join the Midland Main Line south of Chesterfield to enable trains from the south to reach Sheffield Midland station in the city centre. There will be provision for a link north of Sheffield to re-join HS2 towards Leeds.

Other changes to the Birmingham - Leeds line consist of realigning the route near East Midlands Airport to avoid a tunnel under the airport and locating the route through Long Eaton on a viaduct adjacent to the existing Erewash Valley line.

Alterations to the Crewe - Manchester line include relocating the western leg depot from Golborne to a site north of Crewe, realigning a 26km section in the Middlewich-Northwich area and altering the approach to Manchester Piccadilly station.

“There is one further change on which we are now consulting, namely an alternative site for the eastern leg rolling stock depot,” says Britain’s secretary of state for transport Mr Chris Grayling. However, the DfT is also consulting on the proposed Crewe hub project as well as the scope and methodology for the Phase 2b environmental impact statement and equalities impact assessment.

Grayling also confirmed a range of property compensation schemes for Phase 2b “that will go over and above what is required by law” to assist people adversely affected by the new railway.

Now that the alignment for Phase 2b has been fixed, the government plans to deposit the hybrid Bill for Phase 2b in Parliament in 2019. Royal assent is expected in 2022 so that construction can begin in 2023 and the new lines can open in 2033.

Finalising the alignment for Phase 2b means that the total length of Phase 2 is confirmed at 336km.

Final alignment of HS2 Phase 2b to Manchester and Leeds.