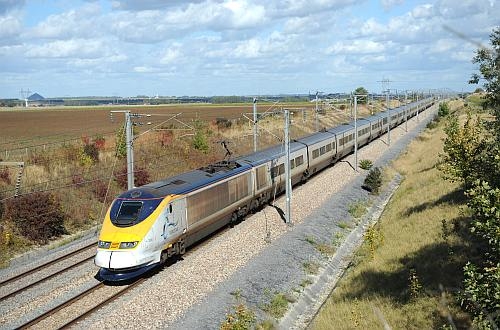 According to advance timings published in the September edition of the European Rail Timetable, passengers travelling on the new Marseille - Avignon - Lyon - Ashford - London service, which starts on May 1 2015, will have to alight at Lille with their baggage in order to pass through French and British border controls and a security check on the upper level at the northern end of the station. This process will take 1h 43min, negating the benefits of high-speed rail travel. Passengers on the outward journey from London and Ashford will go through border and security controls before boarding the train which will run directly to Lyon, Avignon and Marseille.

An experimental service ran last year on nine Saturdays in May and June from London via Ashford, Lyon and Avignon to Aix en Provence. On the return journey, passengers had to get off the train at Lille at 20.38 for border control purposes and the train then departed Lille at 22.04 for London. After it ceased running on June 29, Eurostar commenced its summer-Saturday London - Ashford - Avignon Centre service, and the new service is an expansion of this. However, northbound passengers currently pass through immigration and security checks in Avignon prior to departure as the train runs non-stop to Ashford obviating the need to do so in Lille.

It is very rare for passengers to be forced to alight from trains to pass through border controls even across borders where visas are required. In most cases these checks are carried out on the train while it crosses the border, a situation which existed previously when Eurostar first started to operate through the Channel Tunnel.