CALIFORNIA High Speed Rail Authority (CHSRA) has published its draft 2018 business plan which acknowledges cost increases of 20-35% for each segment of the new railway and extensions to completion dates. 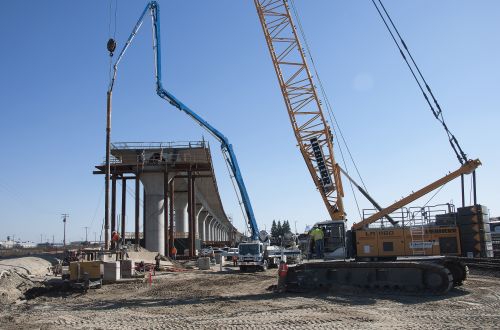 Construction underway in the Central Valley.

CHSRA announced in January that the cost of the 191km Central Valley Segment, which is already under construction, had increased from $US 7.88bn to $US 10.6bn. But now it says the cost of the Silicon Valley to Central Valley line has risen by $US 7bn to $US 27.8bn plus the additional $US 1.98bn to extend the line north to San Francisco and south to Bakersfield.

CHSRA says progress is being made on the first section, as three structures have been completed and there are now 20 active construction sites. However, completion dates for the Silicon Valley - Central Valley Line has been extended to 2029 - CHSRA had expected to launch passenger services in 2025, and for Phase 1 to 2033.

• constructing the Central Valley Segment and completing the environmental review for all project segments (Merced/San Francisco - Los Angeles/Anaheim) by 2022
• extend the Silicon Valley - Central Valley Line to San Francisco to Bakersfield, as this would generate the highest ridership and revenue giving it very strong commercial viability
• invest in the development of 360km of high-speed-rail-ready infrastructure on two lines: Central Valley (Bakersfield - Madera) and Silicon Valley - Bay Area between Gilroy and San Jose/San Francisco to provide early benefits by reducing rail journey times, expanding clean electrified rail services, and preparing for testing and potential high-speed rail operation by 2026-27
• complete project development work to refine the design, scope and cost for the Pacheco Pass tunnels linking the Central Valley and the Silicon Valley
• invest the remaining Proposition 1A funds as a full partner in high-priority projects along the Burbank - Los Angeles - Anaheim corridor in Southern California that will improve freight and passenger rail services, enhance transit connections, improve safety, and accommodate the introduction of high-speed rail service in Southern California, and
• leverage state funding committed to the project to pursue additional private and federal funding or financing to invest in the development of a high-speed rail network in California.

“The draft 2018 business plan presents a strategy to implement the nation’s first truly high-speed rail system in the face of challenges that projects around the world of similar magnitude and complexity have faced and successfully overcome,” says CHSRA’s CEO Mr Brian Kelly. “The plan reflects our commitment to apply lessons learned and make organisational improvements necessary to deliver this project to initiate high-speed rail service between the Silicon Valley and the Central Valley as soon as possible, while completing environmental work and making important investments in Southern California.”

Public comment on the draft plan is now being sought with a closing date of May 7.