California to release $US 4.2bn for high-speed project

The funds will be used to complete the Central Valley line section from Bakersfield to Merced. 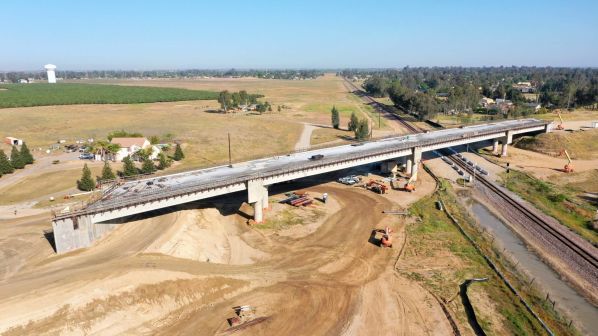 Construction is underway on the Central Valley section of the California high-speed project.
Photo Credit: CHSRA

CALIFORNIA’S new $US 307.9bn state budget includes the release of $US 4.2bn in Proposition 1A funds to the California High-Speed Rail Authority.

The Los Angeles Times reported on June 30 that $US 2bn of this would be dedicated to the construction of the 275km Merced to Bakersfield northern segment of the Central Valley high-speed line.

The California State Senate and Assembly passed the budget for the 2022-23 financial year on June 29 and state governor Mr Gavin Newsom signed it on June 30. The agreement brings an end to a period of deadlock lasting more than a year on how to spend the last portion of $US 4.2bn in bond funds for high-speed rail which was approved by voters in 2008.

The deadlock had resulted from a situation where Newsom wanted to move forward with laying track across the Central Valley farmland, but leading Democratic lawmakers had criticised the Central Valley link and instead sought to reroute the funding for transport closer to their constituents in the urban centres.

The Mercury News reports that now California’s unprecedented $US 97.5bn budget surplus has allowed the state to do both these things and the Central Valley line is now projected to see high-speed trains running by around 2030. The budget surplus could also see state funding for rail projects rising to $US 3.65bn this year - potentially allowing money to be released to cash-strapped San Francisco Bay Area projects such as Caltrain electrification between San Francisco and San Jose and the extension of the Bay Area Rapid Transit (Bart) network to central San Jose. There are plans for another $US 4bn to be dedicated to transport infrastructure through to 2025, but this so far remains unallocated.

“We’re thrilled that California’s political leaders are ratifying the will of the voters by advancing funding for the state’s high-speed rail project,” says Mr Sean Jeans-Gail, vice-president of government affairs at the US Rail Passengers Association. “Now, we’re calling on those same leaders, in partnership with the California High-Speed Rail Authority, to accelerate construction on this corridor.”

“California’s political leaders listened to voters and stepped up for the future of high-speed rail,” says US High Speed Rail Coalition (USHSRC) co-chair and former US Department of Transportation secretary Mr Ray LaHood. “I am gratified that funding for this critical legacy project will be expanded, creating new job opportunities and leading the way not only for California but for the country.”

According to USHSRC, a recent University of California Berkeley and Los Angeles Times poll showed that 56% of California voters continue to back construction of high-speed rail 14 years after voters approved Proposition 1A to launch the project. At the time voters were promised a journey time of 2h 45min from Los Angeles to San Francisco, with connections to Sacramento and San Diego at a cost of $US 45bn. However, since then the estimated price tag has more than doubled to $US 113bn - and that is only for a pared-down network which excludes the Sacramento and San Diego connections.

To complete the high-speed line beyond the Central Valley section is likely to cost an estimated $US 23.8bn and so far there is no funding provided to achieve that even with bond money released in the latest budget and revenue received from California’s cap and trade programme. When overspends and inflation are added it’s likely that even more money will be needed to complete the project.

Earlier in June the California High-Speed Rail Authority released for board approval the Final Environmental Impact Report/Environmental Impact Statement (Final EIR/EIS) for the San Francisco to San Jose section of the project. This comes after the authority certified on April 28 the Final EIR/EIS for the approximately 145km San Jose - Merced section. The authority described this as being a critical milestone moving the project closer to being ‘shovel ready’ once funding becomes available.

For detailed data on rail projects in the United States and around the world, subscribe to IRJ Pro.