CHINESE engineers have completed construction of a 15,989m-long double-track tunnel on the new Xi'an - Chengdu high-speed line which is due to open in late 2017. 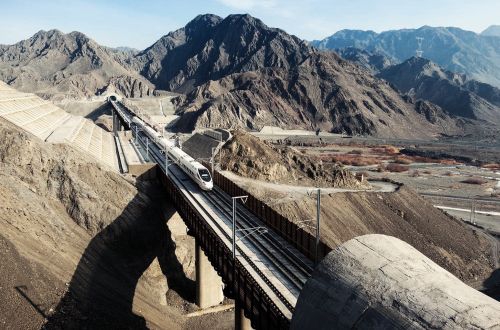 Tin Mountain tunnel is claimed to be the longest double-track tunnel on the Chinese high-speed network, and is 1016m deep at its lowest point.

The 643km 250km/h line is the first railway to pass through the Qinling mountains in Shaanxi province. This 135km section has 127km of tunnels and bridges, which will be completed in August, and includes Tin Mountain tunnel and the West Qinling tunnel which is 10km long.

Bridges span the steep V-shaped valleys between the tunnels which required measures to combat the aerodynamic effect of trains travelling across the bridges between tunnels. Engineers also had to cope with the prevalence of rock falls in the area. Reinforced concrete piles are used for the bridges which are fitted with anti-rock-fall sheds. Rescue stations are provided at intervals in the longest tunnels for use in case of emergency.

The line also has a 70km section with a continuous gradient of 2% - the longest in China -which reduced the length of the new railway through the Qinling mountains.