Construction has also begun on the northernmost high-speed line in China. 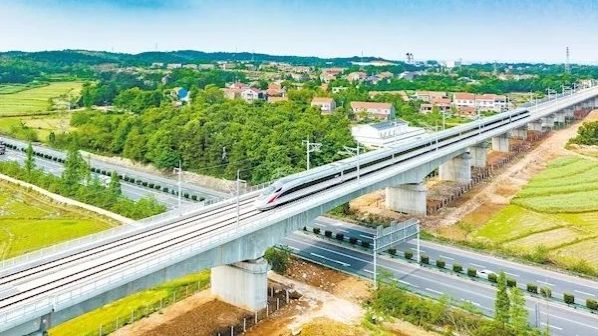 The section, which has five stations - Huanggang East, Xishui South, Herchun South, Wuxiang North, and Huangmei East 5 - reduces the Wuhan - Huangmei journey time to 1h 28min, with trains operating at up to 350km/h.

CRCC North China Company has also begun construction on Tieli Station in the northern Heilongjiang province as part of the Tieli - Yichun line, which when completed will be the northernmost high-speed line in China. Known as the Tie-Yi Railway, the line will have three stations: Tieli, Riyuexia and Yichun West.

Construction of Tieli Station includes the demolition of a previous station building and a pedestrian overpass, which will be replaced by two above-ground floors and an underground floor. The 5000m2 building with have capacity to hold 1000 passengers.

The platforms will be covered with prefabricated canopies, a first in China, which CRCC says will shorten the construction period and reduce the environmental impact.